For the first time the idea of creating a museum in Daugavpils was expressed by the writer, teacher and publicist Arseny Formakovs in the newspaper “Dvisnky Golos”.  In 1926 historian and deputy of Daugavpils city council Boļeslavs Brežgo returned to the question about the foundation of Latgale regional museum in Latgalian press.

The basis of the museum could make the collected archaeological and ethnographical subject collection of Daugavpils Teachers’ Institute. In 1933 there could be viewed the art exhibition of Latgale people in Daugavpils Teachers’ Institute, there were exhibited woodcarvings, ceramics and textiles. The author of the exhibition was a teacher, archaeologist and professional painter Oskars Kalējs (1902-1993). After that exhibition O. Kalējs, popularizing history and art of Daugavpils and Latgale, began work on creation of a museum in Daugavpils. As a result, on May 30, 1938, the Daugavpils Departament of State Historical Museum was opened – the museum celebrates this date as its birthday. 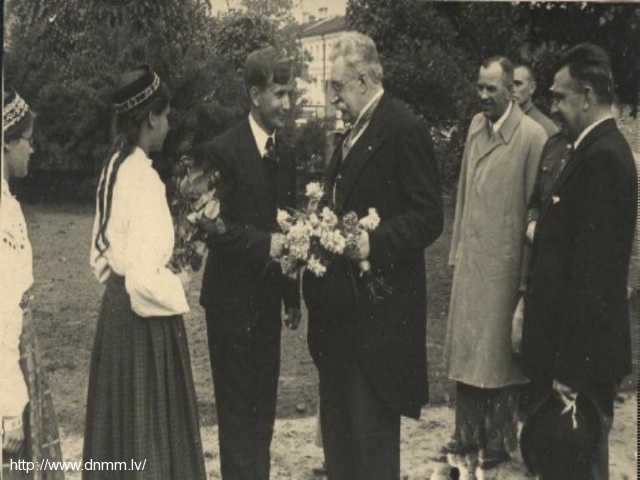 O. Kalējs organized active collection of exhibits for the museum. In 1939 the archaeological collection of the museum was richly increased with the objects that were found during the archaeological dig at river Dviete, lake Lubans and Jersika castle mound. Altogether there were found 2481 items On the eve of Latgale song festival, on June 9, 1940, there was the opening of the enlarged exposition of Daugavpils museum. This exposition was located in nine halls, where were exhibited the artefacts of 13th century, the archaeological finds of Jersika and Dignaja castle mounds, national costumes, textiles, large ceramic collection. Together with the historical expositions, there was opened art gallery. After the soviet occupation and annexation of Latvia, the activity of the museum changed and there were opened new departments – revolutionary and art departments. During the Second World War, under Nazi occupation, the museum was closed, a significant part of exhibits was lost, and the museum resumed its work only in 1944 as Daugavpils National Historical Museum, but since 1945 as Daugavpils Regional Museum. In this period the museum has repeatedly changed its location. In 1949 there were 3128 items in the museum’s collection.

Thanks to the inhabitants of the region, the collection of the museum noticeably increased and in 1959 there were more than 20000 of items in the museum. It was necessary to find new premises for the exposition, and in 1959 the museum was moved to art nouveau building at 8 Rigas Street, where it has been located to this very day. In 1967 Daugavpils Regional and Research Museum got a building at 7 Muzeja Street, where there was developed a continuation of the cultural history exposition and an exhibition hall. The buildings were combined into one and the museum became the Daugavpils Regional and Art Museum.